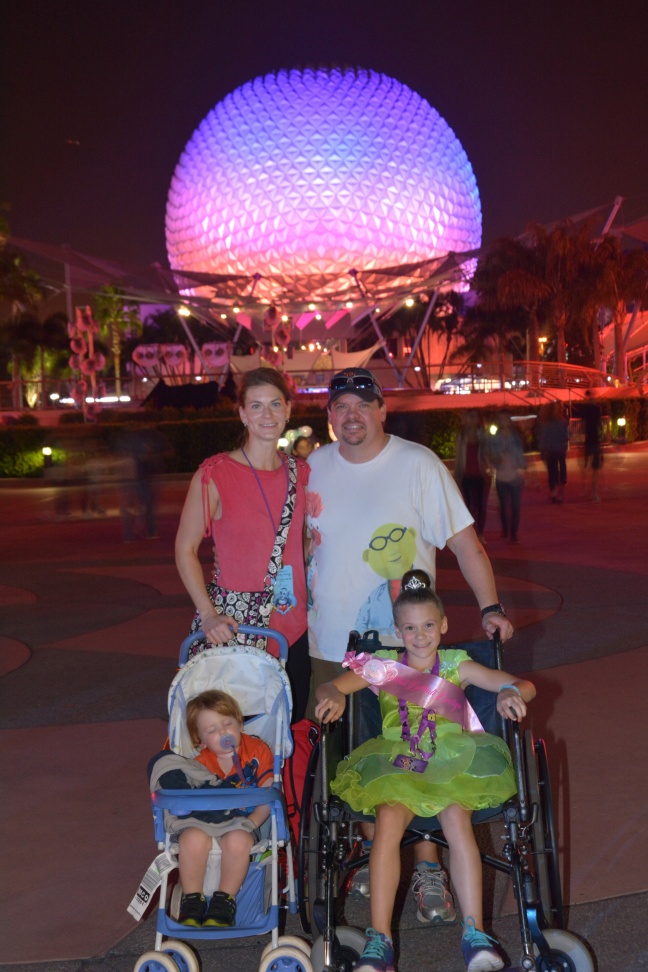 Our first stop upon re-entry into the park was to get our wish child a wheelchair with her Genie pass. Let me explain: Children on their wish trips are given two magical accessories during orientation at GKTW, a GKTW Button and a Genie Pass lanyard. Folks, diamonds ain’t got nuttin’ on these accessories! The Genie Pass and GKTW Button have MAGICAL POWERS, and it was during our second half day in Epcot that we really began to experience the wonder of this part of Mercy’s wish gift!

Initially, we realized the Button and Pass provided us with free parking at the parks which, as any vacation planner knows, is a nice perk. However, the Button/Pass also entitled our child to a free wheelchair, a professional photo or two in other parks (at Disney, a wish child is gifted an entire photo package or Photo Pass), and unlimited Fast Pass status in all Disney Parks. Unlimited. Fast. Pass! And, while I thought I understood what that meant, I was to learn quickly that Genie was the ticket to making our kids’ dreams come true, and he wouldn’t stop at only three wishes.

As we tucked our smiling princess, and her now-fever-free brother into the wheelchair together, we headed toward the Frozen ride. On our way through the world showcase, we saw a long line of people in ‘Mexico’ and wondered what they were waiting for. As it turned out, Donald Duck was meeting people and signing autographs, all decked out in his sombrero! The kids had made their own autograph books hoping to meet some of their favorite characters, and Mercy had a promise she wanted to keep to her Uncle Jim regarding Donald Duck in particular. So, we rolled up to the back of the line and waited.

If you’ve ever had the experience of waiting in a Disney character meet & greet line, you know the wait can be very long and sometimes unfruitful. Characters are very popular, are only available to meet in certain locations at certain times, and only stay out signing autographs for short periods before they take (much needed) breaks. After about ten minutes of entertaining the kids in line, a Disney cast member approached our family. (Each Disney character has several cast members working with them to manage the lines, photo taking, and autographs.) “I see you’re wearing a Genie Pass”, the cast member whispered to me, “Come to the front of the line. Donald wants to meet your kids!”.

What?! As we rode past all of the other waiting families, I felt a little guilty that we weren’t going to have to wait. But, remembering how Mercy had started her day and the hell she lives through because of epilepsy, I lifted my head, smiled brightly, and rolled her forward. Other families may wait for Donald, but we wait- every morning, of every day- for epilepsy to be tamed. I’d have traded waiting experiences with anyone willing in a heart beat.

Donald was delightful, Mercy was enchanted, and Pierson was very suspicious of a larger-than-life duck. Delivering her message (“My uncle thinks you’re better than Mickey!”), Donald reacted as if Mercy had made his day, fist pumping the air, and bowing to kiss her hand. Both kids had their autograph books signed, and again noticing our passes, the Disney photographer took lots and LOTS of photos of this moment in a Wish family’s life. “Any time your child wants to meet a character, come to the front of the line or go through the fast pass entrance”, a cast member explained to me as we left, “Your child does not have to wait.”

The Genie Pass magically moves us to the front of the line to meet Donald Duck! Note Pierson’s clinging to daddy and keeping his distance.

Our children were beaming as we rolled on, now in search of food. We’d been subsisting on gluten free pizza from the GKTW Village kitchen and a stash of snacks I’d ordered through Amazon prime pantry, and had had delivered to our Villa. But, it takes a surprising amount of calories to power walk through Epcot and Disney Springs in a day, and we were all wilting and ravenous. The park was packed for the Food & Wine festival, which has been described as one of the largest scale and most popular events at Walt Disney World. Many visitors were packed in lines and clumps around tasting booths, and some of the wait times for food at the booths can be longer than those for rides. It was hard for our small family to stick together in the crowds, and harder still to find something my kids would eat, that also met Mercy’s medical requirements. Eventually, we settled on a $40 pepperoni pizza from an established take-out place in ‘Italy’, that was neither gluten nor dairy free, because there was no line and because the kids would eat it. Sometimes, you have to compromise. Chomping down our deep dish in the Italy Pavillion, we watched as Epcot’s hundreds of lights illuminated our darkness.

Afterward, we headed to Norway. The fast pass line for the Frozen Ever After ride was a 30-40 minute wait, but we had the kindest people in line with us. All day at Epcot, traders had been opening large books, sporting lanyards, and diving into their hip pouches to pin trade. Mercy’s friends, Kennedy & Hayden, had gifted her with her first Disney pin trading set and lanyard prior to her trip. Pierson had one too. As we weaved under lanterns in Arendelle, Mercy noticed a man in front of us who had pins. “Please, would you like to trade pins with me?”, Mercy asked him tentatively. As the man turned to look down at her in her wheelchair, he grinned and handed her his pin trading book. “Choose any one you’d like, princess”, he said kindly, “You may just keep one without trading.” Mercy took her time pouring through his book, and insisted on trading him for the pin she’d taken of his. He made a big deal showing pleasure at getting her pin. A woman who was with him began talking to me. She was a school teacher of fourth graders. She asked about our kids, Mercy’s makeover, and her wish trip. “God bless you as you fight for your little girl”, she called out to Dan and me, as we separated from her at the wheelchair entrance. There are people in life like the impatient father at the airport who choose not to see beyond themselves (here), but then there are people who – in the midst of their own family vacation – pause to understand your pain and breathe life into it.

The kids loved the Frozen Ever After ride so much, we did it twice. In between rides, we heard a Mariochi band and met Elsa, Anna, and Snow White, through special entrances and Genie Pass magic. We also had boughts of exhausted absence seizures, exhausted dry heaves, and a complete meltdown when Princess Mercy wasn’t visible in Photo Pass pictures taken on the Frozen ride.

There was a special entrance for wish children to meet Elsa! 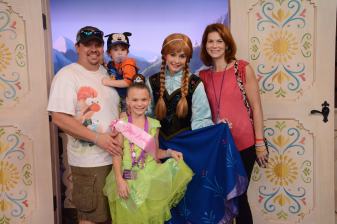 Her happy sister, Anna, was there too! (Still dating Christoff and taking things slooow, per her answer to Mercy’s question),

Snow White talked, walked, and acted exactly the way she does in her movie!

Up we walked to the Photo Studio at the front of the park, to try to find a picture from the second ride that hadn’t loaded, hoping Mercy was in it. The line at the photo kiosk was longer than the ride, but eventually a photo expert helped us locate the photo from her second Frozen ride…..in which she was still not visible. Exhaustion and sadness took over and for the second time that day, and Mercy began to cry. The photo specialist came around the counter and kneeled down in front of Mercy to talk. “I know it’s disappointing, princess, and I know you don’t have time for another ride. It stinks that the camera can only capture one angle. I know it’s not the same thing, but maybe since you’re the only family member not visible in the photos, you could get a solo picture taken with our photographer in front of the Epcot ball.” That was just the suggestion us weary parents needed, and exactly the right promise to quell Mercy’s tears, though still bummed.

On our way out, Pierson was already asleep in his stroller. We stopped at the Epcot ball and had that photo taken as suggested. One Princess Fairy’s first Disney experience…a magical wrap.

© 2019 Wishes for Mercy, All Rights Reserved

"Keep yourselves in the love of God, waiting for the mercy of our Lord Jesus"